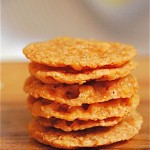 Each day we have been visiting top San Diego Executives and CEO’s who are members of our “Tasting Board”. We thought it would be interesting to have them sample and comment on some of the products that are competing for the Gold Sofi Award. The products we have chosen are silver medal finalists, who were chosen from thousands of other products, to be the best of the best. For more information on The Sofi Awards read my previous post on the awards

The Rosemary Parmesan Crisps by Kitchen Table Bakers is today’s featured finalist. The crisps were created in 2003, on the kitchen table as a delicious snack for the family. Soon friends and local merchants discovered the delicious creation, loved them, and Kitchen Table Bakers was born. In 2009 they won the Sofi Gold Medal for their products. They have also been featured  on Rachael Ray! They are going for the Gold again in 2010. These are the only crackers that are made entirely from cheese! They are made from the highest quality Parmesan and seasonings. They are gluten and wheat free, transfat free, sugar free, and rich in calcium and protein. They are also low in calories and carbs! Rosemary Parmesan Crisps are great as a canopy, for dipping, or as a delicious snack with a glass of wine. 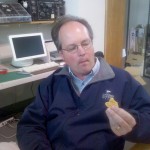 We passed all the beautiful flowers as we entered Andersen Nursery and soon Ken greeted us and took us to his office. He had told me he prefers savory to sweet, so I thought this product would be a good choice for him to taste. His wife Melanie also joined us at the table. They were surprised to learn that this cracker was made entirely from cheese. Ken took a bite first, concentrating on the flavor a moment before commenting. Then he said “It’s really  good!” “It has a great quality cheese flavor and the Rosemary is subtle and not overpowering.”  He also commented that it was nice and crisp. Melanie took a bite next and commented that they are more substantial than they look, nice and crisp, rich tasting, delicious, and that it would just take a few to satisfy you.

Walter Andersen Nursery has been one of San Diego’s most popular nurseries since 1928. Ken is Vice President and General Manager, and Melanie is Marketing Director. There are two locations, one in Point Loma and one in Poway.  Be sure to visit their website to learn about products, services and upcoming events.